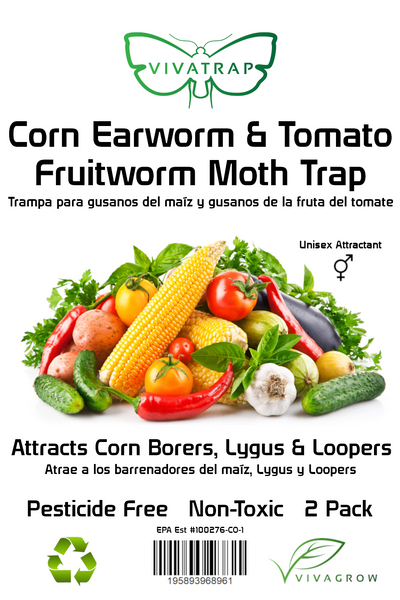 Corn Earworm is widely considered to be one of the most costly crop pests in North America!

Corn Earworm (Helicoverpa zea) or Tomato Fruitworm is found throughout the United States, surviving over winter as far North as Kansas, New Jersey, Ohio, Virginia and Washington.  They are highly dispersive and move from area to area very quickly, making their way to Northern US States and Southern Canada during summer months.  Adult pests may arrive as soon as early May through August, depending on seasonal & environmental conditions.  With a life cycle of approximately 30 days, several generations per season can be expected depending on location:

Corn Earworm eggs are pale green to yellowish to grayish in appearance, dome shaped and measure 0.5mm~ across.  They are generally found on leaf hairs and corn silk, where they will hatch in 3-4 days.  After hatching, the emerging larvae begin to search for an appropriate feeding site, which will generally be found on the reproductive structure of the plant such as fruits, blossoms, flowers or buds. Larvae become aggressive and territorial as they mature, often leaving only one larvae per ear of corn after killing others off cannibalistically.  These larvae will grow into adult moths, which are 1.25-2 inches in wingspan and vary significantly in color.  Corn Earworm moth wings are typically yellow to brownish in color, and often display a small round central dark spot which is easily observed from below.  Adult moths can be expected to live for approximately 15 days, but can survive for up to 30 days under ideal conditions.  During this lifespan female moths will lay 500-3000 eggs.

VivaTrap! Corn Earworm Traps utilize a natural pheromone to lure moths to a sticky surface where they cannot escape.

Instructions: Place traps at edge or inside of planted area, with care to avoid wind and rain as possible.  Deploy traps in early April, replace as needed through August for best results. Lure lasts for approximately 8 weeks.